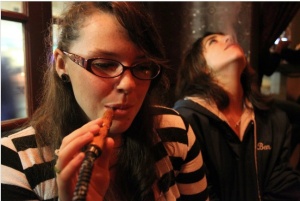 About 10 years ago I took a trip to Turkey and developed a thing for hookahs. Something about the sweet, fruity, smoke, the burning coals, the ritual of the thing–it’s all very seductive. I wound up buying my own hookah in a spice market for about $70, along with a few months’ supply of shisha and charcoal, and lit up fairly regularly with friends over the following year. I told them it was relatively harmless because the smoke was cooled and filtered by the water. Yeah, I had no idea what I was talking about.

Apparently, neither do a lot of other people. Hookahs have become wildly popular among college and even high school students in recent years, due in part to loopholes in indoor smoking bans that have allowed hookah bars–which cater to kids under 21–to thrive. And the smoke these pipes produce is actually pretty dangerous, to say nothing of the carbon monoxide from the coal. Now, legislators, health advocates and school administrators are trying to fight back against what they call the latest front in the ever-shifting war on tobacco. My article on Page 1 of Tuesday’s NYTimes, Putting a Crimp in the Hookah.