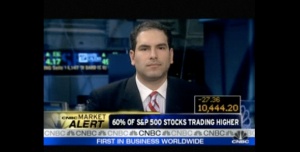 Dan Greenhaus is a bright, sober-minded economist. He’s also a tremendous Phish fan. So who can blame the guy for constantly making hidden references to the band during his media appearances on CNBC and Fox Business Network? It’s improvisational, it’s funny, and it’s harmlessly subversive, a lot like the band itself.  (Alas, no vacuum.) So it didn’t take long for Dan to win himself a little following among the Phish heads, particularly once he started posting alerts about his upcoming appearances on Phish message boards. Which is where people like me found out about it. My story from today’s Times, A Phish Fan’s Secret Smile.